The sands of South Beach are simply sublime. That is the verdict for a second consecutive year from the world-renowned Blue Flag mark of exceedingly good coastlines. Furthermore, Seaside Awards have also been maintained by the three other Blackpool beaches - North, Central and Bispham - for the fourth year in a row.

Blackpool is one of the privileged few when number crunching the accolades granted, as the national totals are just 68 Blue Flags and 117 Seaside Awards. Neighbouring St Annes to the south and Fleetwood's Marine and Ferry and Cleveleys Jubilee and Rossall beaches to the north also keep the flag firmly flying for coasts that can proudly boast, as they too are the recipients of Seaside Awards on the Fylde.

When you enjoy a day on the beach flying a Blue Flag or Seaside Award, you know you are on one of the safest, cleanest and very best in the country

Playing their part in by no small means in the recent renewal of the outstanding sea and sand endorsements is the LOVEmyBeach campaign: getting the message out that we won't settle for anything less than a sparkling Fylde Coast through the likes of their #GetYourFeetWet campaign, encouraging volunteers and putting their quest at the heart of the community. 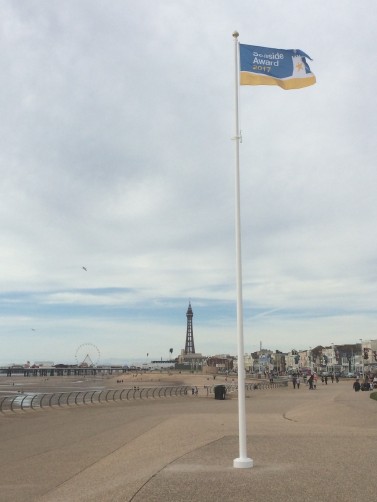