Comedy Carpet - Laughs Beneath Your Loafers

Unveiled in 2011, Blackpool's Comedy Carpet has fast become one of the resort's favourite free things to see. Central Pier to the left, North Pier to the right and top and tailed by the Tower and Spanish Steps, the Carpet has rapidly established itself as a meeting and eating hub for many visitors to Blackpool.

It is of little surprise, given that you can choose to take a leisurely stroll through the scripts, eat a sarnie with a side-order of shenanigans or say to your nearest and dearest "I'll meet you at the Doddy section at half two."

With seats a-plenty around the Carpet, we invite you to pull up a virtual pew as we take your through the Headline Acts, Catchphrases, Double Acts and Pick n Mix selection of Gordon Young's magnificent piece of public artwork.

It soon became obvious that Blackpool had been a magnetic chuckle point for the nation, the sheer breadth of comedians who had performed in the town over the decades is amazing!

Featuring the work of:

Over 80% of which have performed in the town

The comedic Fab Five make up the centre of the artwork.

​Morecambe and Wise - What do you think of the show so far ?

Ken Dodd - What a beautiful day it is for...

​The Chuckle Brothers - To me, To you

Visions of ChuckleVision beneath you on Blackpool's Comedy Carpet #Blackpool #Lancashire pic.twitter.com/IobROed4Ih

Only Fools and Horses - You plonker !

Little Britain - Yeah but, no but

Just back from filming with Harry Hill in Blackpool and took time out to have a look at the amazing Comedy Carpet. pic.twitter.com/Rhw80NyMyE

The Two Ronnies - In a packed show tonight

Cannon and Ball - You lit-tle liar !

Morecambe and Wise - You said that without moving your lips

How does Bob Marley like his doughnuts ? Wi' Jam in !

Garlic bread. It's the future, I've tasted it.

I've just been on a once in a lifetime holiday.

I'll tell you what: never again !

Velcro: what a rip-off

Me and my Velcro joke on Blackpool's comedy carpet. pic.twitter.com/cEhnAGEqXG

A friend of mine always wanted to be run over by a steam train. When it happened he was chuffed to bits.

I remember when safe sex was a padded headboard.

I want to die like my father, peacefully in his sleep, not screaming and terrified, like his passengers.

Yet when all said and done, Brucie still steals the show with his

Blackpool now boasts icons both vertically and horizontally. As of 2011, The Tower has been complemented by our very own distinct take on the Hollywood Walk of Fame. Cheekily declared a "gag pile carpet" by the Yorkshire Post, Gordon Young's masterpiece of mirth is the Best of British, in that the recently departed, living and long-gone can all be found on Blackpool's Comedy Carpet. 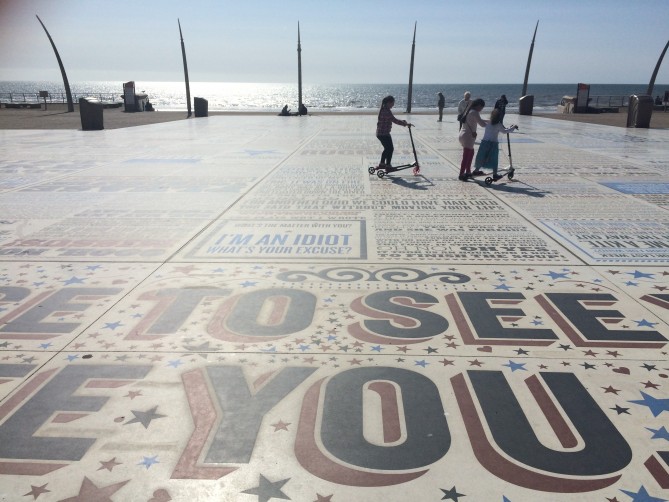