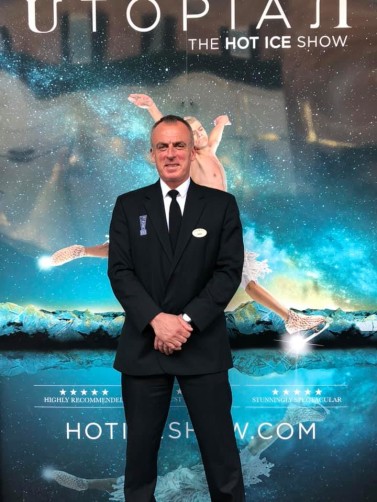 General Manager of the Pleasure Beach Arena and Globe Theatre, David Bailey has been with the company for 40 years. David took to the ice aged 9 and soon started playing in one of the Hockey squads. With his love of skating it was only natural that when a job came available within the Arena he took the chance and applied.

Beginning his career working backstage at the Arena on 18th June 1979, David had some fantastic experiences touring the world with Hot Ice and even working as a magician’s assistant as a part of Showtime on Ice. Settling back in Blackpool he eventually became assistant manager at the Arena before transferring to the Globe, home of Eclipse, in 2000. There he continued to push forward new ideas, help improve staff training and was key in putting the venue forward for the Blackpool Tourism Awards – winning several prestigious accolades.

David said: “Over the time I have been with the company I’ve worked in the Skate Shop, the cafe bar, looked after the ice and even worked as DJ for the Arena’s Beat Nights. You just adapt yourself to what is needed at the time”

As Manager of the Arena David has continued to be influential in maintaining Blackpool as the skating destination it is today. Nominated as the UK’s favorite Ice Rink Manager and UK’s favorite ice surface the Arena continues to impress as the home of The Hot Ice Show. Rehearsals of the new show Utopian started on the 10th of June and opens on the 4th July. Attracting some of the best skaters from across the globe who come to showcase their talents, it is sure to be a magnificent spectacle not to be missed!

“Looking after the skaters and ensuring that they have the right ice surface on which to perform and show off their fabulous tricks right in front of a live audience is a truly special part of the job” he said.

We are really privileged to have such loyal staff, David’s passion and dedication has helped form a part of the company over the years and we would like to raise a special thanks to a gentleman who has dedicated forty years to working with us.

David and his team are currently working hard to get the Arena ready for this year’s performance of Hot Ice – Utopian.  For a taster of what to expect read our Hot Ice Review, or to purchase tickets for Hot Ice, please visit our Blackpool Ticket Office page.